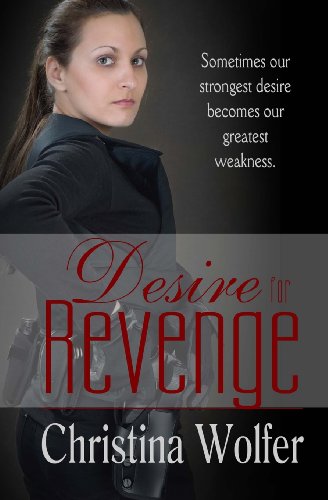 Desire For Revenge
$11.99
Written by Christina Wolfer
Published by Turquoise Morning Press on Unknown date
How many times can one person cheat death? Hot headed, rookie police officer, AJ Harris is about to find out. Twenty years ago, at the age of twelve, she survived a fiery car crash that took the lives of her parents and left her physically and emotionally scarred. Now during a standoff, bank robbers wound AJ and kill her supervising officer. Determined to exact revenge on the killers, she begins to dig into the case and discovers a ring of corruption that includes high-ranking political officials and a drug lord who wants to control the streets. Even police officers in her own department. AJ doesn't know whom to trust. Top on her list of persons of interest is David Hastings, her deceased supervisor's older brother, who walked away from the police department two years ago among rumors of a drug deal gone bad. David claims he's back to find the person who killed his brother. Despite their suspicion of each other, AJ and David begin to work together seeking justice, but can they trust enough to allow love to heal the scars of the past?