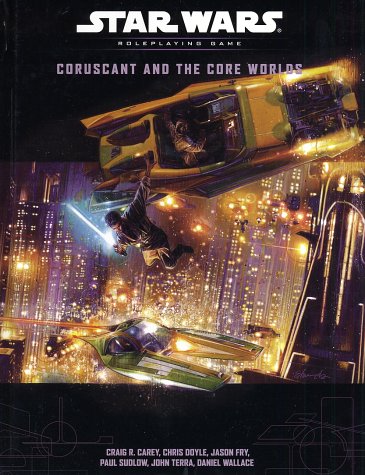 Adventure Awaits at the Heart of the Galaxy.

The glittering pinnacles and shadowy canyons of Coruscant's global cityscape offer an inexhaustible source of action, intrigue, risk, and reward. The shining capital planet also lies within easy reach of each of the other major worlds of the Galactic Core, from the deceptively peaceful expanses of Alderaan to the teeming shipyards of Corellia.

This sourcebook features:
* Detailed descriptions of 28 planets in the Core Worlds region of the galaxy.
* Historical information that spans all three major eras, descriptions of indigenous populations, and key locations for each planet.
* Special emphasis on Coruscant, including characters and locations introduced in Episode II: Attack of the Clones.
* Gamemaster-only sections for each planet with supporting characters, adventure hooks, new creatures, aliens, vehicles, droids, prestige classes, and feats.

To use this sourcebook, you also need the Star Wars Roleplaying Game Revised Core Rulebook.